This list just shows a part of our creative work!We stopped updateing it in 2015.

Please subcribe to our news-letter to get NEWS here...

2015: Wildwuchs: Film music for the opening film "In Erwartung Europas".

2013: Travelpreneurship - The PROFESSION of traveling, enjoying the time of your life and helping other people to do the same. 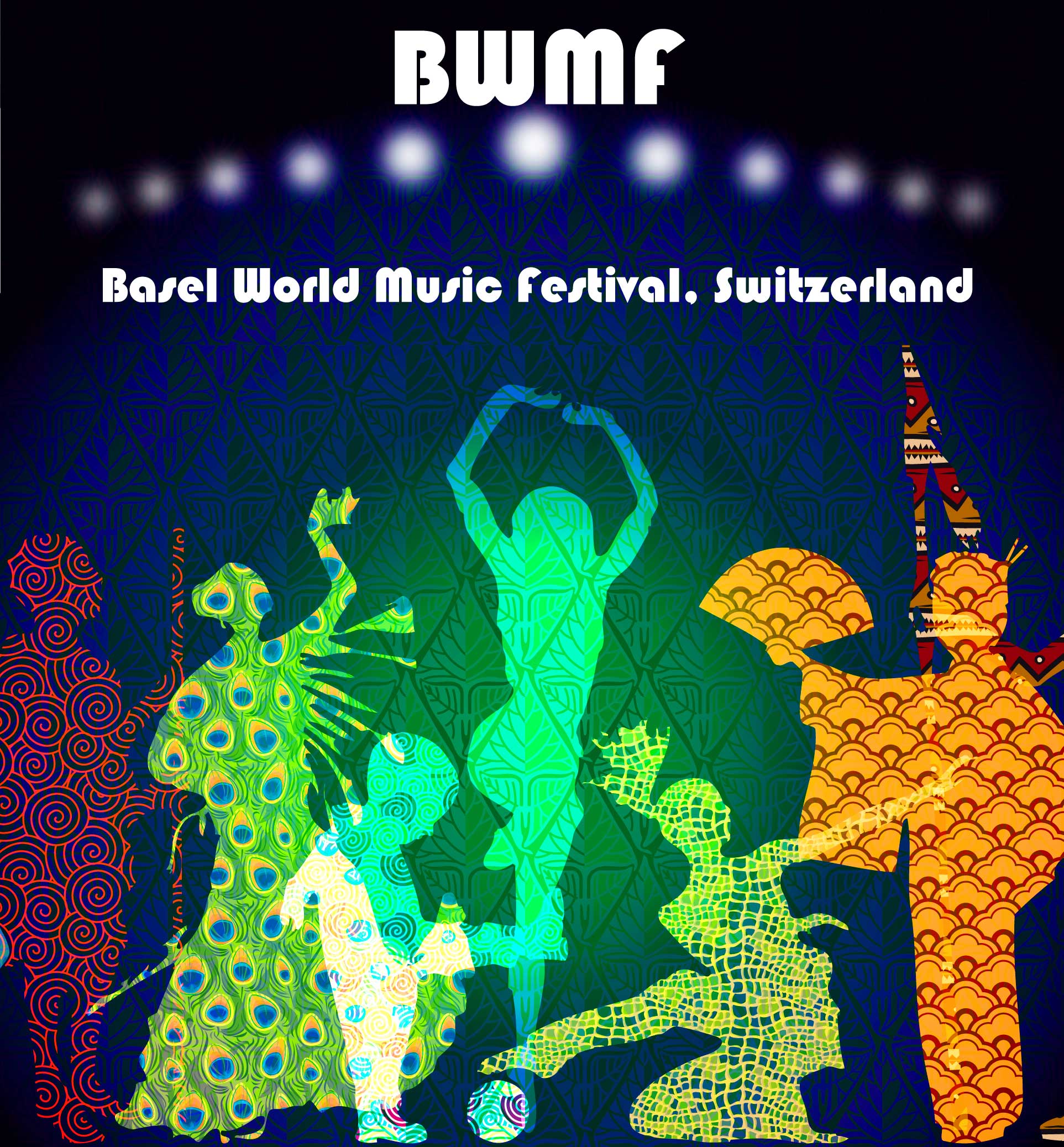 2013: Development and production of the Basel World Music Festivals. 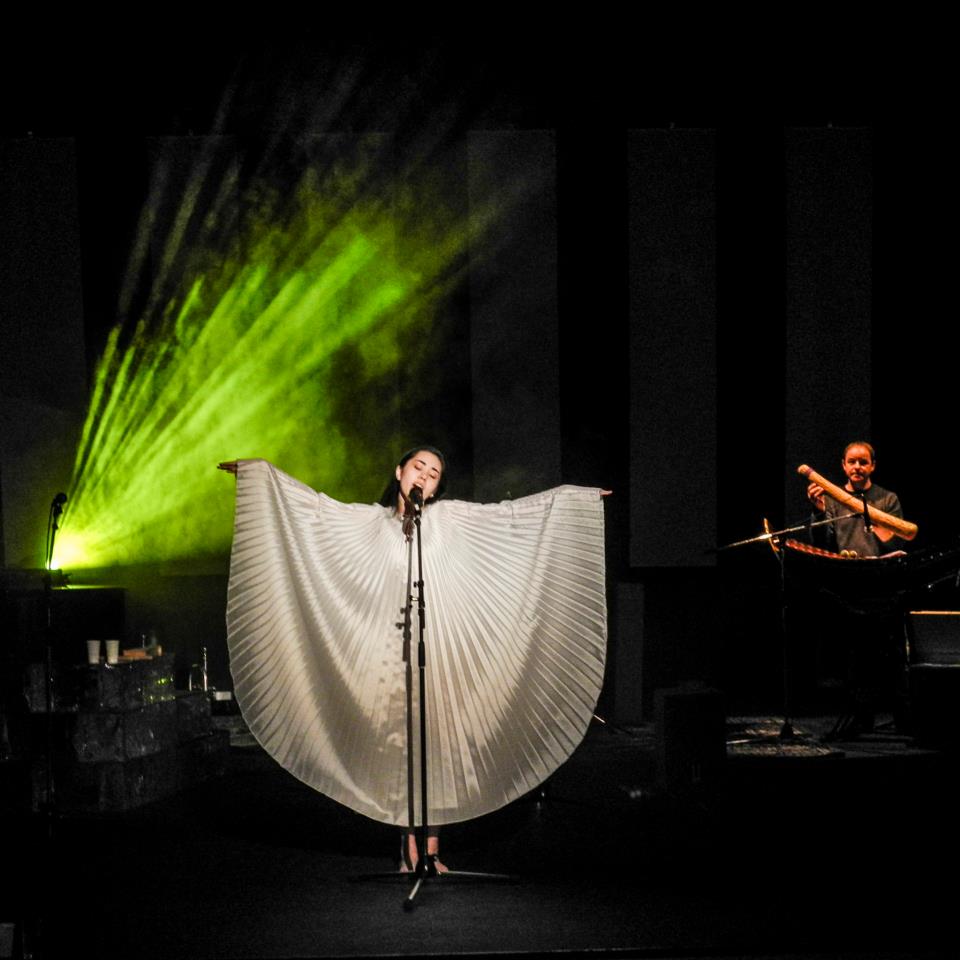 2013: Production and publishing of the live-album "Thomas S. World Music Orchestra featuring Elena House" with the name "Live in Heaven".

Consulting, building, management and marketing of Socialmedia-pages such as More Meaning full life.

March 2012: Communication consulting and production of You-Tube-videos for Ortopag AG.

Dec. 2011: Development and roll out of the Xanny Club Lifestyle campagne.

Dec. 2011: Representing and producing with Thomas Heinz , Fiat Frost and Jane in Bangkok.

April 2011: More about THS sounds words & life and the Thailand Retreat in Hi Class Magazine. And the detailed description you can read here...

THS sounds words & life together with the Hollywood producer Shele Sondheim offers specific, tailer made university programs in music production, music industry, marketing and management. These programs have been done successfully also at the Columbia College Chicago. Please contact us to discuss your specific needs. 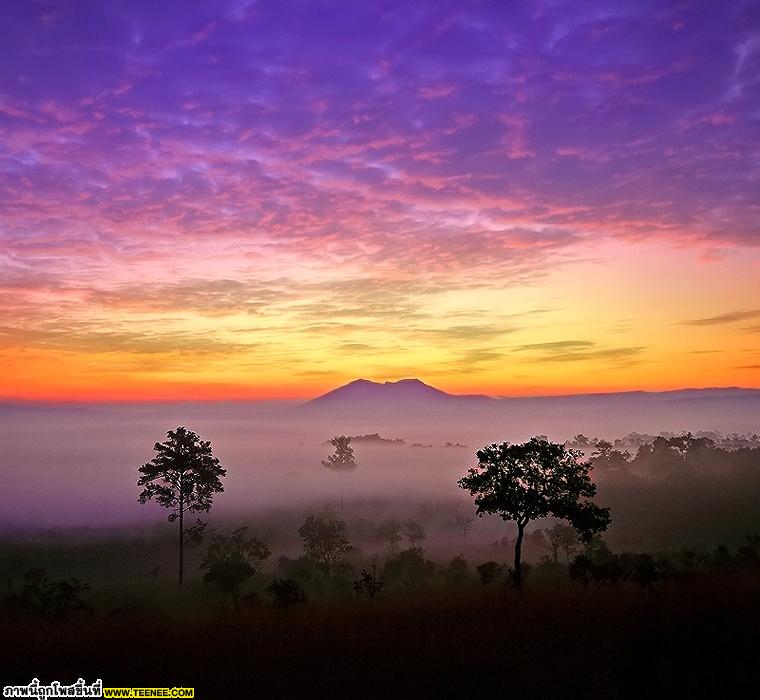 2010: In collaboration with  Dropnet AG THS sounds words & life is consulting and accompanying the WEB-marketing for Sifu Damian Mohler and TIAN LONG GUAN, centre for chinese art of life.

2010: At the moment we are working to increase our activities in Asia/Thailand. Together with our Bangkok representation Xanny Disjad we are planing 10 day "Art of life" journeys. We hope to be able to offer this travels to you soon.

2010: Partnering company Congruent Minds held a presentation skills workshop at Google in Switzerland for the software engineering test Team with 40 participants. The goal was: teach them basic skills in public speaking and slide presentations and increasing team activity.

2005: Video of a solo performance of Sybille Marseiler for ETH-Zürich, click here.

2010: The production of Thomas Heinz "For life" , live in concert CD and DVD is finisched. They can be ordered at THS-shop .

2010: THS-music produces the Sound-Logo for Tischmesse-Basel. The sound-logo is used for the acoustic branding. In radio and TV commercials, at the fair in background and at the forum between the speakers.

2010: THS-music develops their own approach "Coaching and training in creative action" and pushes internal studies further.

2010: Ending of the tour Tour Thomas Heinz & friends in february. THS-music did have to total projectmanagement for this. 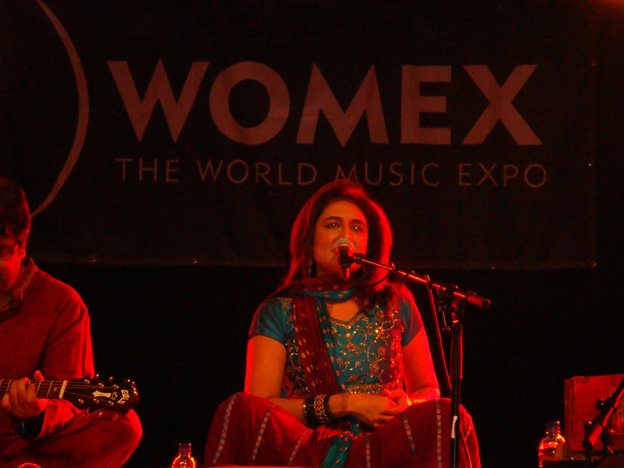 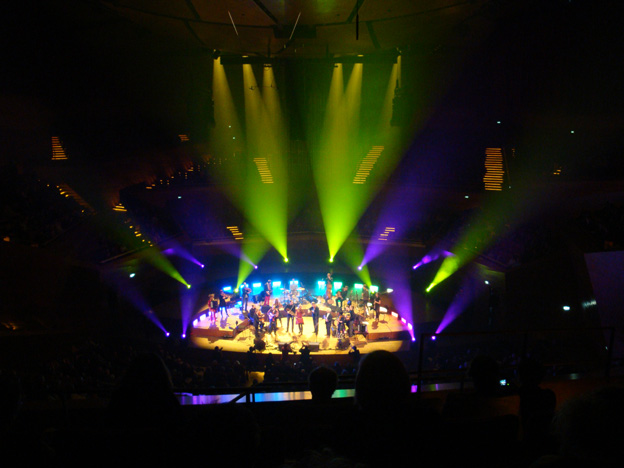 2009: Visit of THS-music at the World Music Expo in Kopenhagen. 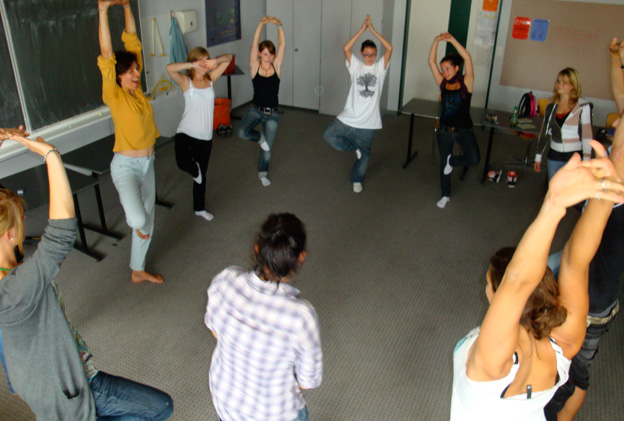 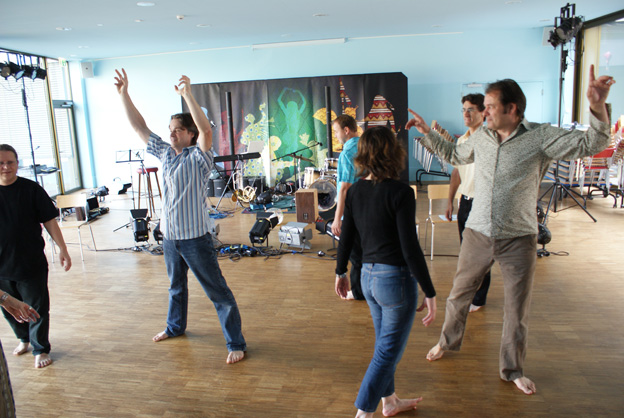 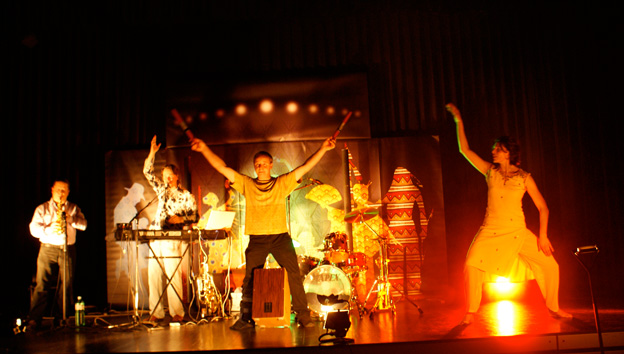 2009: THS-music produces together with Telebasel a live concert TV show for Thomas Heinz & friends. THS-music was a.o. responsible for the audio master recording and the total project management. Have a little look here.... 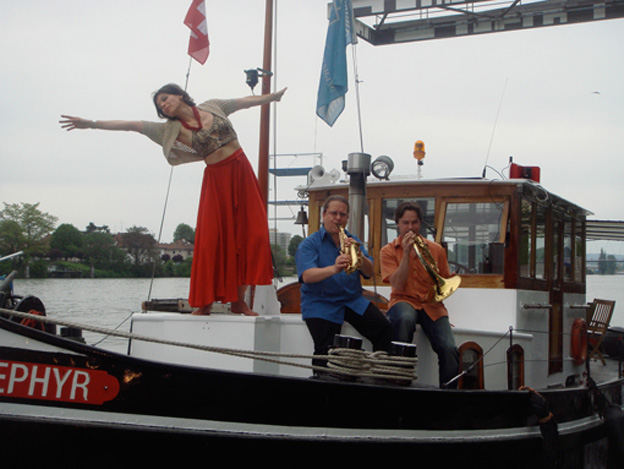 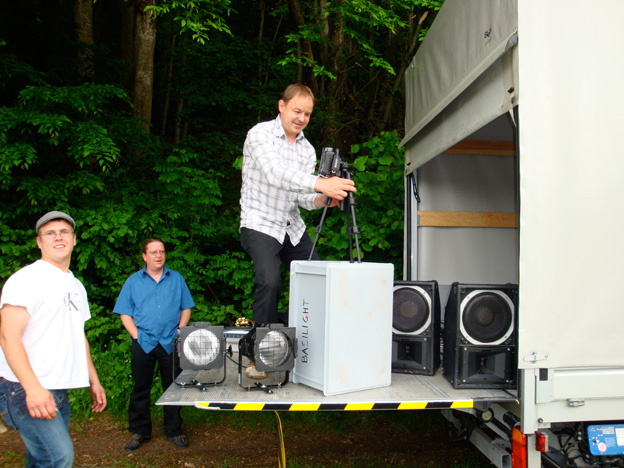 2009: THS-music produces the music video "Beauty of life" for Thomas Heinz in HD. THS-music has done all planing and projectmanagement of this event. See the video here..... 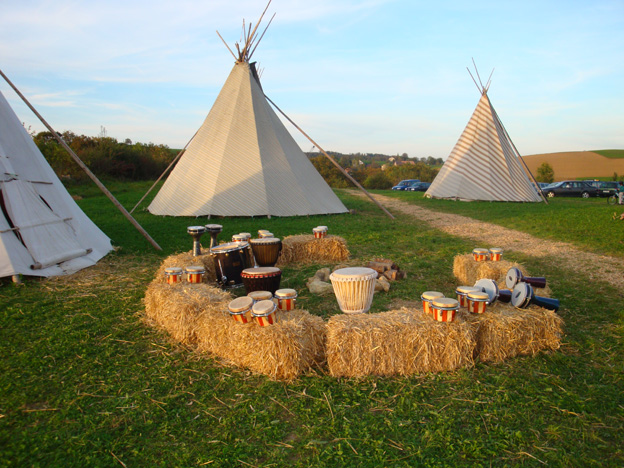 2009: Team drumming in the most beautiful nature of Oberbaselbiet in Buckten.

2009: Communication, sound and drumming workshop with a forth grade class from Bottmingen, Baselland.

Sept. 2009: THS-music gives a presentation to the Raiffeisen Bank of Basel about the use of sound and music in teamworkshops, organisations and firms.
During this session the participants were actively making music and the Raiffeisen Basel Team-Song was created. 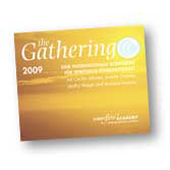 March 2009: THS-music is responsible for the audioservices for the international conference with more than 500 participants , www.gathering.nu , all 4 days of the conference have been digitally recorded and then been edited at the studio of THS-music. At the end THS produced an CD-album which is including 8 CD's. You can find the album her .

This new album of www.thomasheinz.ch  has been released in Switzerland, Germany and Austria at the same time. Labels are: www.turicaphon.ch , www.preiserrecords.at and www.da-music.de .  The album is also available at all download plattforms or at shop.ths-music.ch .

June 2008: THS-music gives a presentation to the Swiss-Marketing-Club Basel-Region about the use of sound and music in teamworkshops, organisations and firms.
During this session, which was held in the restaurant "Blinde Kuh" in Basel, the club-song and SMC-soundlogo were created.
The members of the SMC were actively involved in the making of their own corporate sound. And here is the song...

March 2008: THS-music is composing and producing the sound-logo for the "Bathys Club".

Jan 2008: The second album of "Thomas Heinz" is in development. "Thomas Heinz" create therefor a totally new sound and at the same time prepare to perform the "Thomas Heinz"-songs live on stage. At MIDEM 2008 the first three songs of the new album are presented to the music business.

June 2007 THS-music produces a "internal corporate song" for www.ubs.com. The work has been done within the development of company culture for a division for UBS. Our works were integrated in workshops which have been managed by a coach.
With the use of music and sound within the cultural workshops UBS reaches a much bigger lastingness of the content.
Please have a listen here

Jan 2007: THS-music congratulates SUN'DRA (Sandra Wild) to the participation at www.musicstar.sf.tv on the swiss TV-channel number one.

Sept. 2006: "In Latvia www.ladybird.lv releases her album "5 moods". THS-music did write a song for this album."

July 2006: The song for the 50-th anniversary of the Swiss Marketing Club www.smc50.ch is composed and produced by THS-music.
The song is performed by Jacqueline Blouin, www.jacquelineblouin.com.

April 2006: The third album from www.sundra.ch is released. THS-music did all vocal recordings with SUNDRA (Sandra Wild) and the mastering and wrote two songs on the album.

October 2005: The second album of www.jaywalk.ch is released in Japan under the name of "Ramona and JW". The album is under the label of www.tridentstyle.co.jp.

September 2005: THS-music records and mixes the vocals of some of the songs from the new album "Right now and back then " of Jacqueline Blouin, www.jacquelineblouin.com The album is released, a.o. by www.tridentstyle.co.jp in Japan.
THS-music did also the mastering of the full album.

September 2005: THS-music composed and produced the filmmusic for the product placement film "Mr. Noname" for companies such as Canon and Siemens.
The director of the film was Benny Fasnacht from www.crome.ch.
The title song "Me and Mr. Noname" was performed by ALEXA.

August 2005: THS-music produces/composes three songs together with the english singer/songwriter ALEXA, www.alexa1.co.uk. The production was done in colaboration with the management of ALEXA www.pepperpot.co.uk. Our favorite from this production is the song "It drives me crazy".

July 2005: THS-music produces/composes four songs together with the english singer/songwriter Anna Neale, www.annaneale.net. The production was done in colaboration with the management of Anna Neale www.madisonmanagement.co.uk. Our favorite from this production is the song from Anna Neale "So hard".

April 2005: The second SUN'DRA - album "What Would They Say" is entering HMV charts top 30 two weeks after release (www.hmv.co.jp).
THS-music did write two songs for this album and was responsible for the SUN'DRA-vocal-recording (Sandra Wild) of all songs on this album. 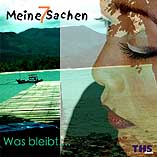 February 2005: The repertoire of songs with German lyrics "Meine7Sachen" grows constantly.
The songs "Was bleibt ?" and "Gib mir deine Sonne" could be some influence to this musical summer.
Again the work together with CCK (www.cckmusic.com) was of success.

January 2005: The song "Great friend" from THS-music is recorded and published by www.jennymay.lv, www.ladybird.lv and www.annapolanski.lv.
"Great friend" reaches top 10 positions in the radio air play charts. See also www.platformacd.lv you could buy the CD there.

January 2005: THS-music is attending the MIDEM 2005 at the SUISA-booth and present, among others, their first video-production.

December 2004: Sun'dra (Sandra Wild) gets well known in Switzerland too. The biggest commercial newspaper of Switzerland www.coopzeitung.ch makes a big report about

"the Swiss that conquers Japan". Sund'dra (Sandra Wild) is in the Top 100 charts of Japan with this album for weeks. Currently the recordings for her second album are done at THS-music, which is again responsible for the musical procdution.

October 2004: THS-music produces, together with CCK more songs, which will be presentet at MIDEM 2005. 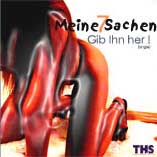 October 2004: THS-music releases the first production in German language with the name "meine7sachen". This production was made in cooperation with the artist CCK. 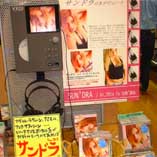 August 2004: The album "Hi this is Sun'dra" is released in Japan, among others at www.hmv.co.jp. Only 4 weeks after this release it was taken the decision to release a second album in spring 2005. THS-music will take the responsibility for the musical production for this album too.

July 2004. The song "You will make your way" has been recorded by the production company www.aktivmusic.lv in colaboration with www.micrecmusic.lv in Latvia. For the debut album of Jenny May which will be released in spring 2005.

The album "Hi, this is Sun'dra" will be released in late summer 2004 in Japan through Trident Style Inc.